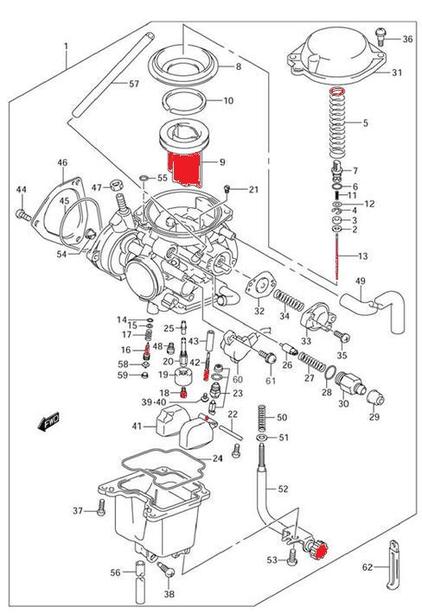 The parts in red are the items that will be adjusted and/or replaced for Optimum Performance with our kit, that is customized to your specifications.

Both carburetor types work on Bernoulli's principle: the faster air moves through the Venturi, the lower its static pressure, and the higher its dynamic pressure. The throttle (accelerator) linkage does not directly control the flow of liquid fuel. Instead, it actuates carburetor mechanisms which meter the flow of air being pulled into the engine. The speed of this flow, and therefore its pressure, determines the amount of fuel drawn into the air stream.

The main disadvantage of basing a carburetor's operation on Bernoulli's principle is that, being a fluid dynamic device, the pressure reduction in a venturi tends to be proportional to the square of the intake air speed. The fuel jets are much smaller and limited mainly by viscosity, so that the fuel flow tends to be proportional to the pressure difference. So jets sized for full power tend to starve the engine at lower speed and part throttle. Most commonly this has been corrected by using multiple jets. For cold starting, a different principle was used, in multi-jet carburetors. A flow resisting valve called a choke, similar to the throttle valve, was placed upstream of the main jet to reduce the intake pressure and suck additional fuel out of the jets.

CV Carb
In a (CV) "constant velocity"  carburetors, Variable-venturi is done by a vacuum operated piston connected to a tapered needle which slides inside the fuel jet.  This is most common variable venturi (constant depression) type carburetor . These carburetors are also referred to as "constant vacuum" carburetors. 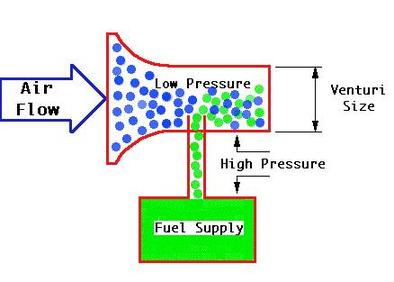